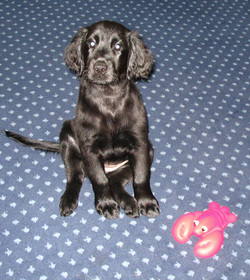 Baby Emma at 8 weeks old
Although Emma was only with us for 4 weeks she made a lasting impression. At the age of 13 weeks she died of complications from a congenital heart defect. Emma was a smart girl - during the 4 weeks before we knew she was sick she learned to obey a few commands and was doing very well with her leash training. We were living in Maine at the time and we had fun taking her to the ocean. She was a little unsure of the waves - when one came in she would run backwards a few feet. She enjoyed running around with seaweed hanging from her mouth. During a week of blood draws, ultrasounds and electrocardiograms her tail never stopped wagging and everyone commented on how good she was. We still miss Emma and wonder what she would be like today. 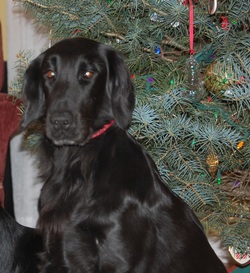 Tara, Christmas, 2012
We lost our beautiful Tara to cancer just  2 months before her 9th birthday. She was our foundation bitch who leaves 15 puppies including our Jet & Gems. She was a quiet, steady girl, always willing to please. As a puppy she learned to follow commands by watching our older girl, Katie. As the number of dogs in the house increased we noticed that she was the alpha, but she never uttered a growl to get what she wanted. When the dogs went out the others would make way for her so she could wait in her spot at the front. She had her favorite corner of the couch & if it was occupied she would lay her chin on the edge of the couch & stare at the offender. If that didn't work she would either slowly climb up until there was no more room & the other dog got down or she would go to our back slider, look up the hill & bark. When everyone else ran to the door to see what she was barking at she would quietly claim her favorite spot. Good bye sweet girl - we miss you terribly but know you are reunited with your mother and siblings that have gone before you. 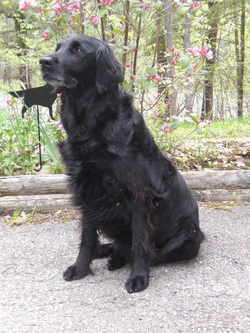 Katie on her 9th birthday, Mother's Day, 2013
The day after we lost Tara Katie was diagnosed with a tumor on her liver. There was nothing we could do but make her last days the best we could. For the next few weeks her appetite diminished day by day - even homemade meatballs which she loved in the beginning would no longer tempt her. A month after her diagnosis we sent her on her way across the Rainbow Bridge. She and Tara are together again playing & chasing tennis balls which Katie would do right up until the end. Rest in peace beautiful Katie. She was the one who got us started in the dog world from conformation to obedience to agility and we will never forget her. 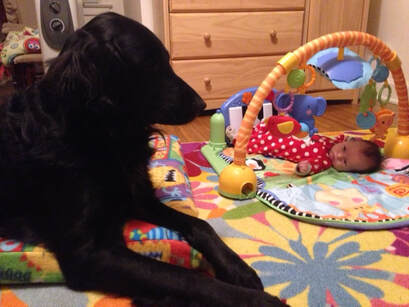 Otto, January 26, 2015, watching over one month old Winter.
Just 17 days after Gems' passing Becky and Scot also lost Otto to cancer. He had had a slow growing tumor on his upper hind leg that was not cancerous. Unfortunately, he did develop osteosarcoma in the same leg.  He was the first of our puppies to be shown under the Acadia name. He was doing very well but about the time he turned 2 he had a growth spurt and was the too tall to meet the breed standard. We stopped showing him and he started working with Becky as a therapy dog at the residential facility where she was a children's therapist. In 2014 he became the companion to our granddaughter, Winter.