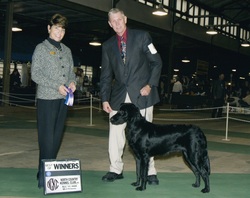 Otto was the very first puppy shown under the Acadia kennel name. We co-own him with our daughter, Becky. He is pointed in the US, but by the age of 2 years he had grown too much - he is now 2 inches over the breed standard. So we ended his show career. Becky has put both his CGC and TDI titles on him. She is a children's therapist at a residential facility for pre-adolescent and adolescent children so Otto goes to work with her almost every day. The kids love him and he has a great time with them.
2015: Otto and Gems have a new job. On December 24, 2014 our daughter gave birth to a beautiful baby girl. The dogs adjusted very well and watch over her closely. Winter enjoys having the fur siblings - she finds Gems very amusing; but we don't know why.
August 27, 2019: Just 3 weeks after Becky and Scot suddenly lost Gems they said goodbye to Otto. He had had a slow growing tumor on his upper hind leg that was not cancerous, but it did change to an osteosarcoma. 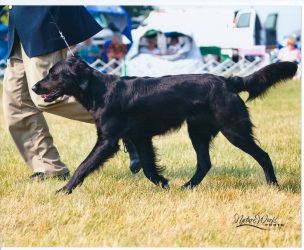 February, 2013: Gemma has been returned to us. Our daughter & son-in-law have given her a new forever home and she is now known as Gems.  She has adjusted well to the change & has bonded with Otto & their mixed breed boy Bixler. Becky has taken her to Obedience classes & she has earned her CGC. She is an elegant girl from our Summer litter. Little Purple Girl was very outgoing in the whelping box; very inquisitive and playful. We will continue working on her championship - she is pointed, has taken reserve to a major several times & earned her first major in June in a competitive group. Gems is very birdy and we are hoping to spend some time with her working towards her JH title. Gems gave birth to 6 puppies on June 14, 2014; 2 black pups and 4 liver pups. She is now retired, spayed and enjoying life in Rochester as a lady of leisure. Sadly, Gems died suddenly on August 10, 2019 due to what we think was a fast growing lymphoma.