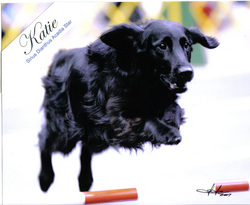 Our kennel name is a tribute to Katie - she is the reason we are so involved in the dog world today. We were living in Maine when she came to live with us so she spent a lot of time at the beach and camping at Acadia National Park. Her breeder thought she was show quality so we started showing her. Unfortunately she stopped growing when she was 2 inches short of the breed standard. She is perfectly proportioned, just too small! We had already started her competition obedience training so we continued on to her CD. Katie loves agility - she easily completed her NAJ title. Standard is more of a challenge for her. She doesn't always qualify but she still has fun! Katie passed away due to a liver tumor on October 11, 2013. 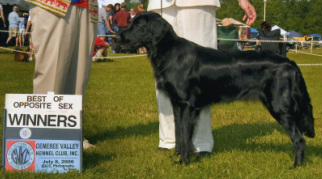 Tara is a laid back, easy going girl. As our foundation bitch she has produced 2 litters of beautiful, healthy puppies. The Rainbow litter of 6 pups was born March 16, 2008. Her Summer litter was born on June 25, 2009. That litter consisted of 10 busy little Flat-Coats. We retired her from the show ring and motherhood in the fall of 2010 with only 3 points left to go on her US championship. We are hoping to get her back into the obedience ring or maybe let her try agility. In the meantime she is enjoying being a lady of leisure.
We lost Tara to lymphoma September 12, 2013. 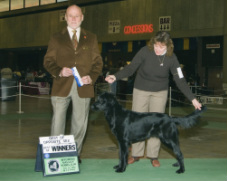 Emma epitomizes the typical Flat-Coated Retriever. She is still very much a puppy and we don't think she will ever change. Emma greets each day with unbridled enthusiasm and is always right by our side to see what we are doing. If she's not getting enough attention she'll give us a head bump so she does. Emma started her show career with a bang. In her first match at 3 1/2 months she placed first in a group of 14 3-6 month old pups. She surprised us a few weeks shy of her first birthday when she took a 4 point major by going WB, BOW, & BOS over a special. She was close to finishing her US championship but she has had limited ring time while recovering from motherhood. Emma did much better in Canada where she earned her Canadian championship in just 3 weekends. She also completed her CD title in 3 straight trials. Emma is now retired and we are planning to do more obedience and field training with her. Like Tara and Katie we lost Emma to a fast moving cancer on April 12, 2018. 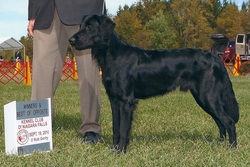 Jet was the top show puppy from Tara's Summer litter and he found his show home with us. He is a handsome boy who knows his place in a pack of women. Jet is pointed  in both the US and Canada and has earned his first major; he has filled out and is maturing nicely. John has started working towards Jet's WC and JH. Jet exhibits an aptitude for the field and has lots of drive. The boys are having fun with this activity - male bonding! Jet earned his CD in March, 2012. John is now training him for his CDX. Jet retired from the show ring in the spring of 2015. We had taken Jet into the vet for some GI issues when she noticed a heart murmur that had not been there before. An ultrasound revealed a tumor in his heart and a build up of fluid. Two weeks later he was too weak to come out of his crate in the morning and we decided it was time to say good bye.